St. Christopher’s Primary School is a small Catholic primary school that has been associated with the Pallottine Order and St. Christopher from its opening in 1960, to the present day. The school is situated in a secluded part of the eastern suburbs of Melbourne.

Recent building refurbishments, as well as an investment in information Technology and a constant focus on ‘best practice’ have put St. Christopher’s at the forefront of excellence in education as reflected in the school’s consistently outstanding test results.

St Christopher’s School and Parish has been in the care of the Pallottines since the beginning. The founder, St Vincent Pallotti was canonised in 1963 and hailed by Pope John XXIII as a patron of the Second Vatican Council. His vision, like that of the Council, was for the awakening of the laity to their vocation, calling everyone to the mission of Jesus, and to holiness in the heart of that mission.

Vincent, from an early age had a great love for the poor, giving his lunch, his shoes away, and even his good suit. As a teenager he wanted to be bread for the hungry, food and drink and medicine for the sick. As a priest he worked with prisoners, people in hospitals, and the military. He cared for youth and for students in Rome who came from every part of the world who looked to him for help.

It was more than doing. Vincent invited people to work and pray together to meet the many needs of Rome and the world. He called everyone to be an apostle after Jesus, the Apostle of the Father, and Mary Queen of Apostles.

According to tradition, St. Christopher died a martyr in Lycia in 251 A.D. during the reign of Decius, a Roman Emperor who conducted the first systematic persecution of Christians. Very little is known about Christopher’

One of the most popular legends describes the saint as a tall man of tremendous strength who made a living carrying people across a raging river.

One day his passenger was a child who grew so heavy as they crossed the river that he feared they would both drown. Christopher was amazed that one so mighty as himself could be overcome by one so small. The child then revealed that he was Christ, and the heaviness was caused by the weight of the world which he bore.

The name “Christopher” means “Christ-bearer”, and it is no surprise that he is often depicted as carrying a child, who, in turn, is carrying a globe. In modern times, St. Christopher is considered to be the patron saint of travelers, especially of motorists. 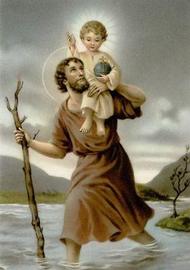